Polka Chicks is an energetic folk music duo from Finland. Kukka Lehto and Teija Niku revel in picking through the dusty shelves of folk tune archives to find hidden musical gems and then polish them anew in a uniquely Polka Chick way. They also compose their own music.

On the new Polka Chicks cd “Viulu ja viinantilkka” (A fiddle and a drop of liquor) you can hear three polkas, but also some waltz, schottis and polska. Their songs reveal the darkest sides of femininity: singing and drinking is a way to hide your sorrows, unfaithful man gets his eyes perforated and the predictions from loveless childhood become reality.

Polka Chicks spice the Finnish melancholy with a combination of joyful polkas and shameless lyrics. The songs are written by Kukka Lehto, who plays the fiddle and mandola, and accordionist Teija Niku’s instrumental compositions bring some urban folk music to the table. Norwegian guitarist Vidar Skrede is featuring on two tracks on the cd.

Previously known as a trio, the Polka Chicks was chosen ”Band of the Year” at the Kaustinen Folk Music Festival in 2009. That same year their self titled debut recording was released by Ääniä Records. Since 2010, Kukka and Teija have continued their work as the Polka Chicks duo playing successful concerts both in Finland and abroad. 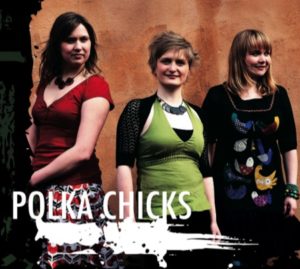